This Thursday, June 23rd, myself, Lindsey, Myles and Sure Shot are celebrating the 2nd Anniversary of our little FAM party. We’ll be commemorating the occasion with a night full of the finest R&B ever recorded. (If you didn’t make it to our Holiday R&B party, let me just tell you… You do not want to miss it!) You can catch us in the basement of Von – 3 Bleecker Street btwn Bowery & Lafayette – from 9PM until the slow jams end at 3AM.

Eleven’s Rollin’ In The Deep remix

It took a minute, but I FINALLY got this remix of John Legend’s take on Adele’s monster hit polished up just hours before heading to the airport for my European jaunt. (A rougher version is on the promo mix I put up for the trip over here.) Thanks to the Yum Yum guys in Germany for providing the inspiration, Eugene Tamborine for the additional keys, and Icewater for his deft engineering hand. I hope you enjoy!

Rollin’ In The Deep (DJ Eleven remix) by 11InchRecords

We’ll be celebrating the release at Brooklyn Bowl tonite from 8PM on with The Kickdrums performing & DJ sets by Terry Urban, Tilla from The Kickdrums, and Eleven. It’s free all night!  (Flyer after the jump.)
END_OF_DOCUMENT_TOKEN_TO_BE_REPLACED

Big Jacks & I have been talking about a follow up to our first Great Minds mixtape for a while now.  And, since I’ll be ringing in the new year in Toronto this year, what could be a better time to get our acts together.  (NYC massive – make sure to check Ayres & Cosmo, along with our buddies Evil Dee, Rich Medina, Rok One, Prince Klassen, Michna, Nick Hook, and special guest Romanthony at Public Assembly in Williamsburg, BK for NYE.  Details over here.)

After the jump you’ll find the tracklist & alternate links.  But, with no further adieu, I give you some of the finest in disco, funk, and boogie, aka Great Minds 2!
END_OF_DOCUMENT_TOKEN_TO_BE_REPLACED 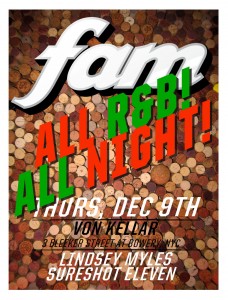 This Thursday the FAM fam-a-lam will be throwing a special all R&B edition for the holiday party season.  Come on down to the basement of Von (3 Bleecker Street btwn Bowery & Lafayette) from 9PM on and be ready to do some singing along to all of your favorite R&B jams.

And, if you missed our little FAM mix, you can grab it over here

For the first time in years, I actually bothered to take a camera with me on my European trip and it reminded me how much I like taking pictures!

Head on over to my site for the whole bunch.

This is what being on tour actually feels like

Sure Shot, Lindsey, Myles & myself just finished up a little mix to spread the FAM musical vibes. Check the full tracklist after the jump & check us every Thursday at Von (3 Bleecker Street btwn Bowery & Lafayette in the basement).

Grab it over here