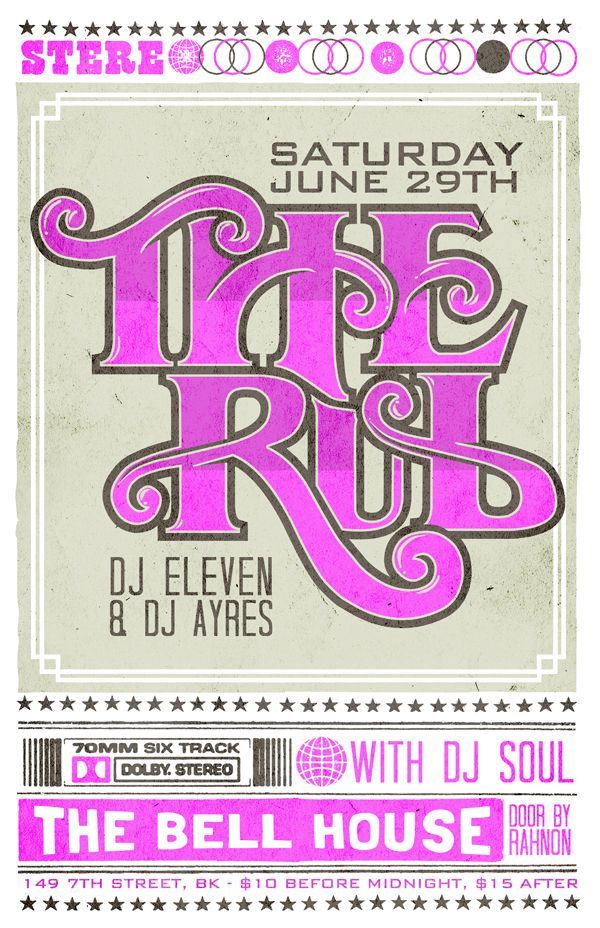 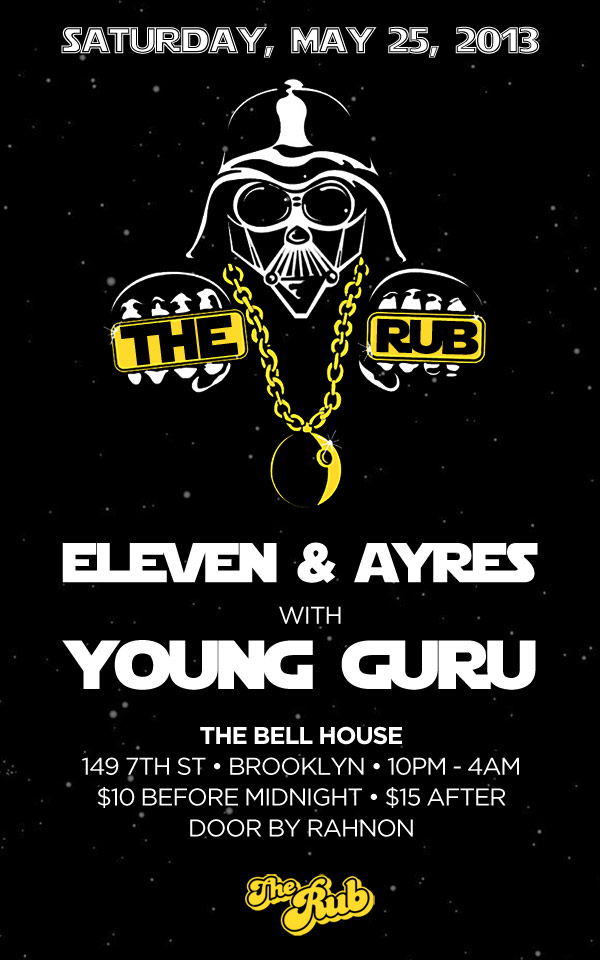 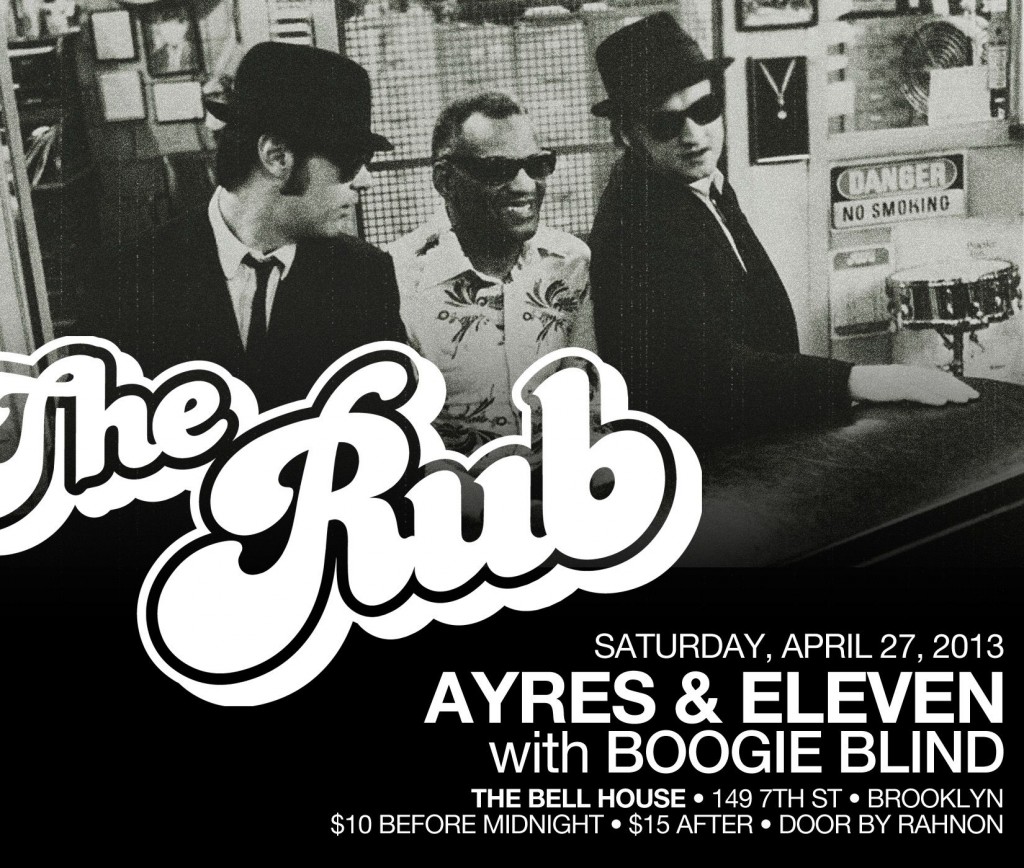 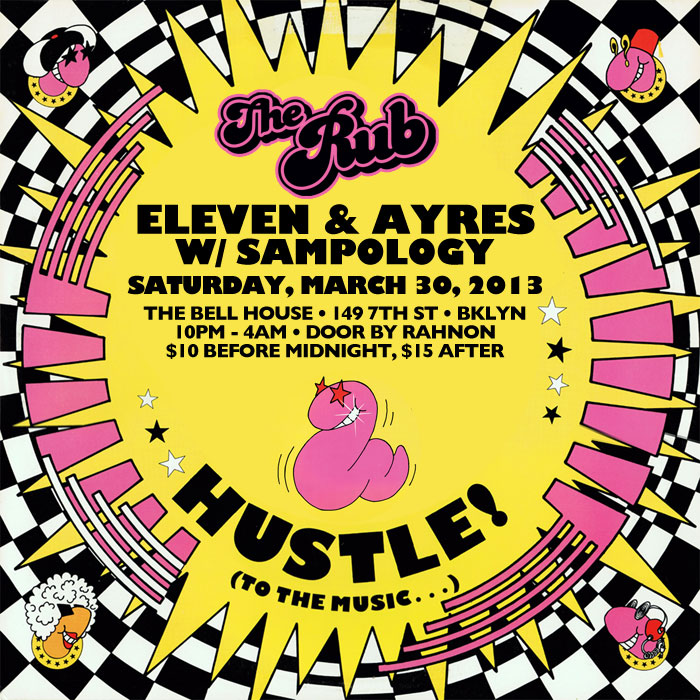 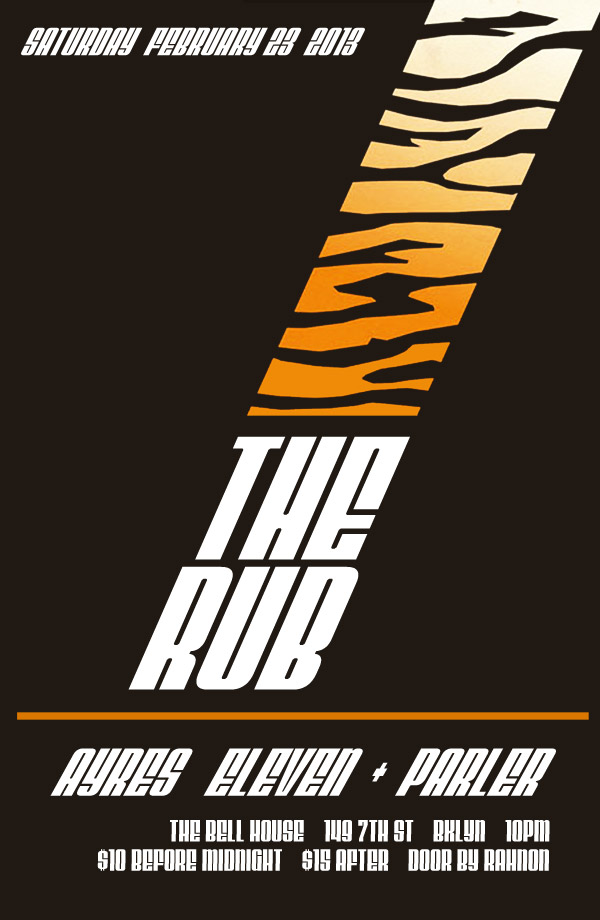 END_OF_DOCUMENT_TOKEN_TO_BE_REPLACED

Big congratulations to our friend Four Color Zack for his victory in the World Finals of Red Bull Thre3style. You can read all about his set over at the Turntable Lab blog HERE.

Our buddy Mike the 2600 King posted video of his championship winning set in its entirety. This is just bonkers y’all!

We also did a feature on Zack not too long ago in our Friends of The Rub series. Find that HERE.

Southpaw Closing in March, The Rub Moving to Bell House

Ten years ago Mikey Palms told us he was opening a bar in Park Slope in an old 99 Cent store with his childhood friend, Matt Roff. As soon as we saw it, we immediately knew we wanted to throw a party there. The Rub started the first summer Southpaw opened, and after an unprecedented run of over a hundred monthly parties, we are sad to report Southpaw is closing.

Simply stated there would be no Rub without Southpaw. Before Fifth Avenue had any sushi restaurants, yoga studios or boutiques, Mikey and Matt took a bet on the neighborhood. They helped us connect with a community of people who wanted to stay in the Slope and party with their friends to quality music. Southpaw was an oasis for Brooklynites who didn’t want to go to Manhattan and spend half a paycheck on bottle service while some asshole played The Strokes off an iPod. And they didn’t just invest in the neighborhood, they invested in three DJs who were dying to find a big room were we could play cool shit for a crowd who loved music as we did.

We were talking about it the other day, and Mikey put it in perspective when he said “remember, when we opened, you could still smoke in bars.” This was just six months after Bloomberg took office – before mash-ups, before 50 Cent, before Serato or MySpace, or all-over print and skinny jeans, before any of us had gone on tour or released a record. If you were there in the beginning you remember Roger, and Uncle Moe, and Marissa, and Bill, and Alex (RIP). You remember when Mark Ronson Djed on Halloween in face paint, when Diplo and Low-Bee played in a blizzard, when DJ Premier dropped in for a surprise DJ set and when Dave Nada tore the room wide open with Baltimore club. You remember when a couple fucked the sink off the bathroom wall, when Pumpkinhead got in a fistfight at the end of the night and rolled around on the dancefloor, when the winner of the White Rapper Show threw up and passed out on stage, when we got shut down and had to move to Bar Reis because Southpaw didn’t have a license to serve lemons and limes, when Jeru the Damaja hopped on stage and performed “Come Clean.” There was a special feeling every month, like a big house party, loud and sweaty and thrilling. And in the last few years, you also remember waiting on a long ass line around the block. We could have moved The Rub to a bigger club plenty of times, but it was such a special feeling and a perfect crowd, and besides we were loyal to Mike and Matt, and of course Kenan and Ro and the whole crew.

This Saturday will be the last time The Rub is at Southpaw, but it’s not the last Rub. Mikey and Matt are going to focus on their Williamburg club, Public Assembly.  The Southpaw space will become a tutoring center for children.  Eleven, Cosmo and I are taking The Rub down the hill to Bell House, a beautiful venue very similar to Southpaw in a lot of ways, but a little bigger, with a little better sound, and a little off the beaten path. We looked at a bunch of clubs in Brooklyn and talked to a ton of our friends, and everyone agreed that this feels like the perfect room. The gang’s all going to be there, with Rahnon and Matt at the door, and me, Eleven and Cosmo on the turntables. We’re switching it up to the last Saturday of every month, and we hope you’ll help us spread the word so we can keep it up for ten more years. Please please please sign up for our email list, follow us on Twitter and Facebook, and ask your friends to do the same. And if you don’t have anything else to do this Saturday, come to Southpaw (EARLY, to beat what will surely be a crazy line) and join us for the first Rub of the rest of your life!
http://www.itstherub.com
https://twitter.com/ItsTheRubhttp://www.facebook.com/ItsTheRubhttp://www.thebellhouseny.com/ 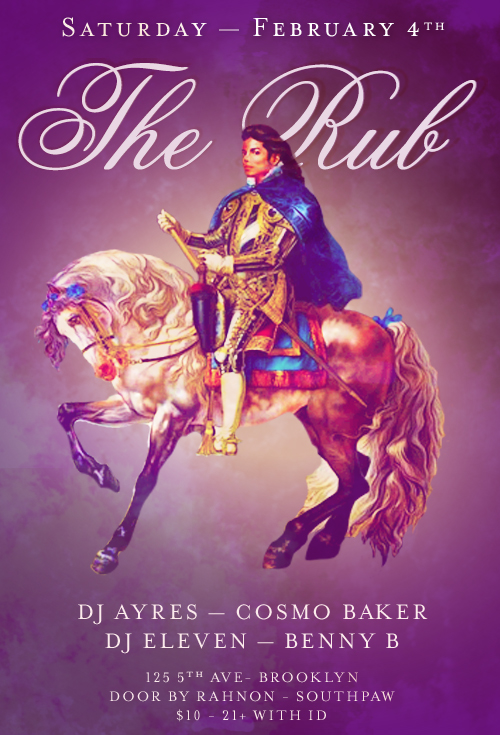 After the jump: 10 years of Rub Flyers!
END_OF_DOCUMENT_TOKEN_TO_BE_REPLACED

Over a year after starting on the project, the song that I did with the homie Mike Baker The Bike Maker has finally hit the (digital) record stores (and their virtual shelves)! Vancouver’s Kutcorners contributed a great bassline for the original version. Mike2600, Illo + Keam, and DJ Ayres (you may have heard of him) all flipped great remixes! And, Kalani did a fantastic job freakin’ the artwork.

If you look on down below the artwork, you’ll see more than a couple places to buy it!

Turntable Lab or Gigacrate or Juno or Amazon or iTunes

Many years in the making…  Well, more like a couple months.  But, damn!  It felt like years.   I just finished up and dropped an EP entitled “Dance Your Way“.  It features bass by the homie Kutcorners from Vancouver and art by Minneapolis’ own Mike The 2600 King. And, best of all, you can cop it from iTunes! Go here and buy buy buy! 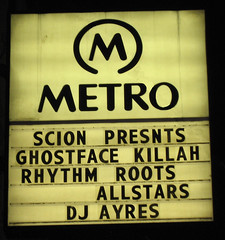 I was out on tour opening for Ghostface all last week. It was a little bit of a challenge because I didn’t play any dirty south hip-hop, house, club, 80s or whatever else I’m used to playing, but I had fun with real schitt hip-hop and classic soul and reggae. It’s pretty awesome getting a room full of backpackers to sing along to Gloria Jones “Tainted Love.” 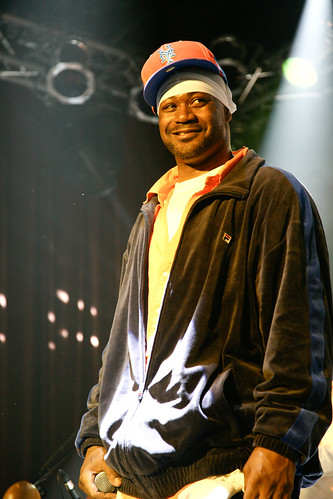 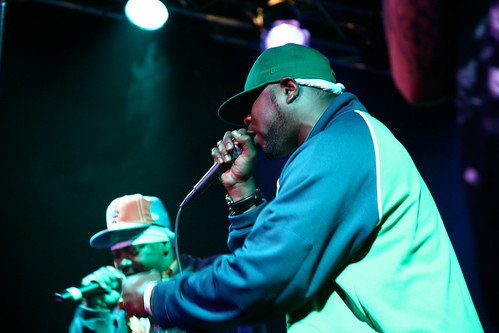 Cappadonna killed it with those long breathless verses from Winter Wars and Daytona 500.  When he’s 48 bars in and still going the crowd just loses it. 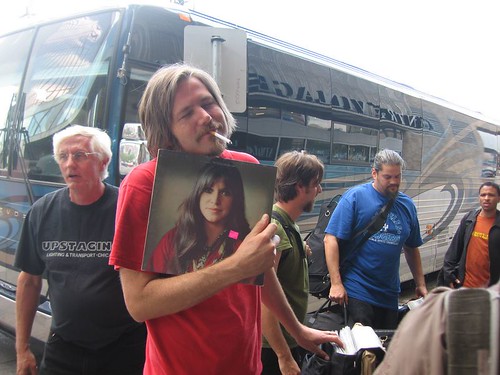 Rhythm Roots Allstars unloading from the bus. These dudes kill it live, staying faithful to the original Ghostface instrumentals and freaking shit like Nautilus, No No No and La La Means I Love You. The old guy is our bus driver; he’s normally the driver for Good Charlotte. 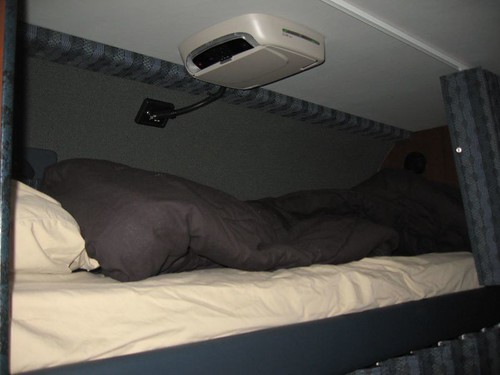 My bunk on the bus is the size of a coffin but has its own DVD / CD / radio player. Scion puts us up in four star hotels but we don’t even sleep there.  To get from St Louis to Minneapolis for example we had to leave at like 3 AM so the hotel was just a really expensive place to shower and change clothes after the show. 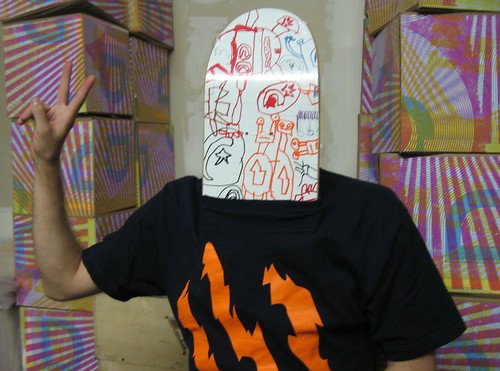 Mike the 2600 King showed me around Minneapolis and took me to the Burlesque Design studios. 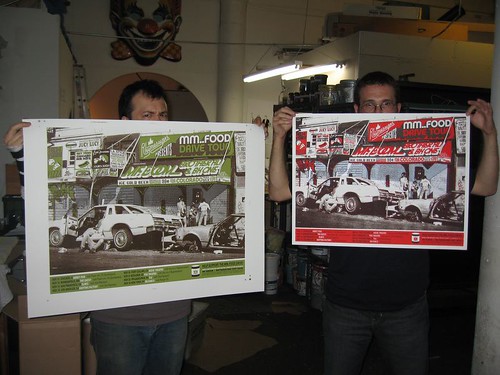